After more than 2 years of work and preparation оur gladiatorial project is now a reality. We are realize our long-planned project Equipment for over 10 gladiators which is in a European level, there is still a lot to be desired, so we can compare with our colleagues from Western European clubs which are equipped in a very high level. As we will strive to improve our training and our equipment.
For starters we are focus on the most popular gladiators as a variety: Hoplomachus, Murmillo, SCISSOR, Essedarii, Dimachaer, Retiarius, Provocator, Secutor and Thraex. We did our best to achieve gladiators equipment with a possible high quality!
We recreate the well known and attractive personages from our antiquity.

In Alba Iulia Romania was held Roman Festival Apulum 2015 1, 2, 3 may 2015. This festival is a traditional event which involved some of the groups who are prepared in Rome and connected to this historical period re-enacting groups in Eastern Europe. This is a festival on which was demonstrated by the participating groups warfare and equipment, lifestyle and handicrafts of the Romans and Dacians. Fortunately, we also received an official invitation to our club for this festival. It's an honor for us and is an indication that the efforts that we put for our quality Roman re-enacting at last year's events were not in vain and we have not been gone unnoticed.The Invitation to us is from Cultural Association for Living History Alba Iulia, National Museum of Union and the municipality of Alba Iulia. In the festival attended more than 200 reenactors! More than 5000 were guests and spectators of the festival.
Video of our club gladiator’s participation, part of this festival.

We demonstrate in front of the audience some of our gladiator’s stage battles including: Thraex, Retiarius, Secutor, Dimachaerus, SCISSOR, Hoplomachus and Murmillo.
Command signals are from our club cornicen. 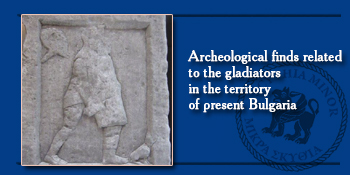