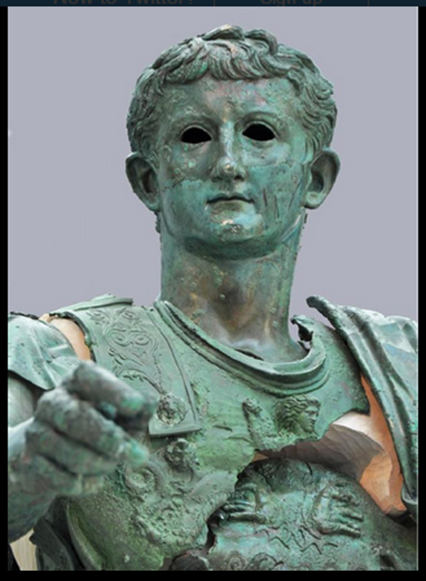 "Germanicus wants YOU for the legion".

Unfortunately there no one to mark in Central and Western Europe this anniversary event. Since late last year 2015 I was excited by this round annual which I mention now in 2016. But because it does not directly concern our LEGION IIII SCYTHICA which never was active in the Roman-German Wars,I have not done any publications on the subject.
Germanicus' own campaigns in Germania made him famous after avenging the defeat at the Battle of the Teutoburg Forest and retrieving two of the three legionary eagles that had been lost during the battle. The Roman people for centuries would consider him as Rome's Alexander the Great due to the nature of his death at a young age, his virtuous character, his dashing physique and his military renown.
Though the shock at the slaughter was enormous, the Romans immediately began a slow, systematic process of preparing for the reconquest of the country. In 14 AD, just after Augustus' death and the accession of his heir and stepson Tiberius, a massive raid was conducted by the new emperor's nephew Germanicus. He attacked the Marsi in a surprise attack. The Bructeri, Tubanti, and Usipeti were roused by the attack and ambushed Germanicus on the way to the winter quarters, but were defeated with heavy losses. 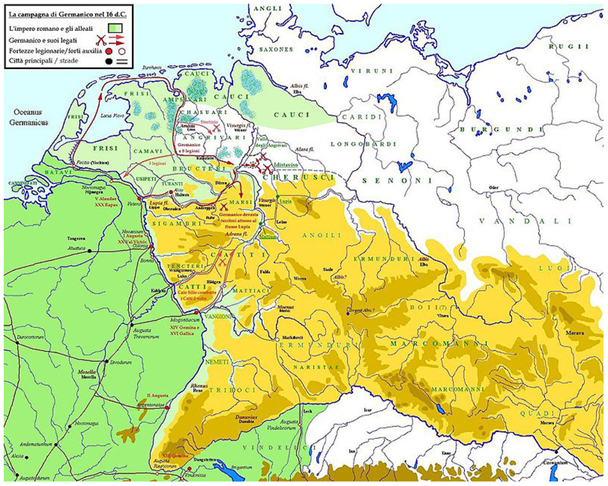 The next year was marked by two major campaigns and several smaller battles with a large army estimated at 55,000–70,000 men, backed by naval forces. In spring 15 AD, Legatus Caecina Severus invaded the Marsi a second time with about 25,000–30,000 men, causing great havoc. Meanwhile, Germanicus' troops had built a fort on Mount Taunus from where he marched with about 30,000–35,000 men against the Chatti. Many of the men fled across a river and dispersed themselves in the forests. Germanicus next marched on Mattium (caput gentis) and burned it to the ground.

After initial successful skirmishes in summer 15 AD, the army visited the site of the first battle. According to Tacitus, they found heaps of bleached bones and severed skulls nailed to trees, which they buried, "...looking on all as kinsfolk and of their own blood...". 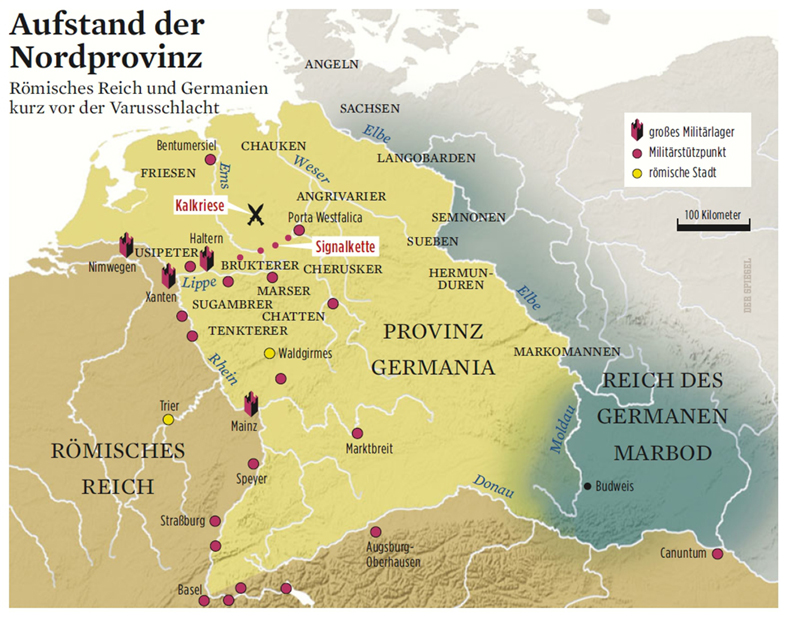 After the death of Augustus in AD 14, the Senate appointed Germanicus commander of the forces in Germania Inferior.A short time after, the legions rioted on the news that their recruitments would not be marked back down to 16 years from the then standard. Refusing to accept this, the rebel soldiers cried for Germanicus as emperor.Germanicus put down this rebellion himself, preferring to continue only as a general. In a bid to secure the loyalty of his troops and his own popularity with them and with the Roman people, he led them on a raid against the Marsi, a Germanic people on the upper Ruhr river.
Germanicus massacred the men, women, and children of the Marsi that he and his forces encountered and recovered one of the three legions' Eagle standards.
He led his 8-legion army into Germania against a coalition led by Arminius, which had successfully overthrown Roman rule in a rebellion in 9 AD. In 14 AD, his legions routed and destroyed most of the Bructeri and recovered the lost Eagle of the 19th Legion during a raid. He was able to devastate large areas and eliminate any form of active resistance, but the majority of the Germanic peoples he encountered fled at the sight of the Roman army into remote forests. The raids were considered a success since the major goal of destroying any rebel alliance networks was completed. 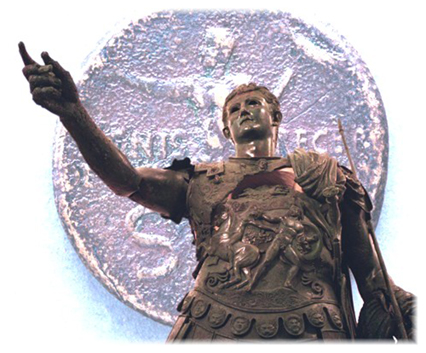 Germanicus' leadership and command qualities were shown in full at the battle as his superior tactics and better trained and equipped legions inflicted huge casualties on the Germanic army with only minor losses. One final battle was fought at the Angivarian. 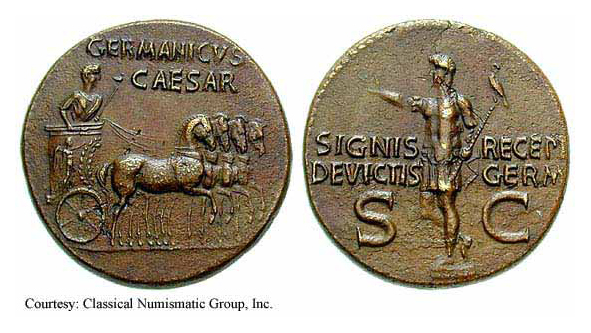 Wall west of modern Hanover, repeating of high german fatalities forcing them to flee. With his main objectives reached and with winter approaching Germanicus ordered his army back to their winter camps. After a few more raids across the Rhine, which resulted in the recovery of two of the three legions eagles lost in 9 AD, Germanicus was recalled to Rome and informed by Tiberius that he would be given a triumph.

Germanicus' campaign against the Germanic tribes.

Under Germanicus, the Romans marched another army, along with allied Germanic auxiliaries, into Germania in 16 AD. He forced a crossing of the Weser near modern Minden, suffering some losses to a Germanic skirmishing force, and forced Arminius' army to stand in open battle at Idistaviso in the Battle of the Weser River. Germanicus' legions inflicted huge casualties on the Germanic armies while sustaining only minor losses. A final battle was fought at the Angivarian Wall west of modern Hanover, repeating the pattern of high Germanic fatalities, which forced them to flee. In summer 16 CE, Caius Silius marched against the Chatti with 33,000 men. Germanicus invaded the Marsi a third time and devastated their land.
With his main objectives reached and winter approaching, Germanicus ordered his army back to their winter camps, with the fleet incurring some damage from a storm in the North Sea. After a few more raids across the Rhine, which resulted in the recovery of two of the three legions' eagles lost in 9 AD,[46] Tiberius ordered the Roman forces to halt and withdraw across the Rhine. Germanicus was recalled to Rome and informed by Tiberius that he would be given a triumph and reassigned to a new command.
Germanicus' campaign had been taken to avenge the Teutoburg slaughter and also partially in reaction to indications of mutinous intent amongst his troops. Arminius, who had been considered a very real threat to stability by Rome, was now defeated. Once his allied Germanic coalition had been broken and honour avenged, the huge cost and risk of keeping the Roman army operating beyond the Rhine was not worth any likely benefit to be gained.
Tiberius called an end to the costly military campaigns in northern Germania. Germanicus was ordered to return to Rome, where he was granted a Triumphus by Tiberius on 26 May 17 AD. Arminius would be later assassinated on the orders of rival Germanic chiefs.
Details on military operations:
www.badwargamers.com
Equipment suitable for historical reenactment is the same as I describe here:
www.legio-iiii-scythica.com
Of course there is many comprehensive publications on the matter which I will not have the opportunity to mention here because not all details in the publications are important for the topic. There are people who have written books and papers on this topic. Such as respected by me Lindsay Powell.
www.pen-and-sword.co.uk

Germanicus and Alexander by Tacitus

At Germanicus’ death, Tacitus introduces a telling rhetorical comparatio of Alexander the Great and Germanicus. Despite the fact that he cites anonymous persons (Ann. 2.73.1, erant qui...) as his source, his wording indicates that he agrees in substance with all of the key points of association, namely their similar appearance, age, and place and manner of death. Also the more detailed comparison found in the following lengthy nam clause, though apparently attributed to Tacitus’ anonymous source, is reinforced by Tacitus’ own description of Germanicus in the preceding narrative. Moreover, some of the points in the nam clause suggest that Germanicus is, in fact, greater than Alexander. For example, he says Germanicus was “mild toward his friends, modest in his enjoyment of pleasures, married only to one woman, and had certain children” (2.73.2). To anyone familiar with the Alexander tradition and with Tacitus’ sinister implications, it is easy to see the thinly veiled criticism of Alexander who was known for killing his friends (Clitus, Parmenio, Callisthenes), for drinking to excess, and for having unconfirmed or illegitimate heirs (the dubious Heracles with his mistress Barsine and the posthumous Alexander IV with his queen Roxana).
Gissel (2001) and Borzsák (1982) have already outlined many specific scenes and features of the Tacitean narrative that clearly allude to the historiographic tradition of Alexander. However, since the comparatio itself serves to elevate Germanicus to a status superior in some ways to his model Alexander, it is useful to consider what other models may be operative in Tacitus’ presentation of Germanicus, particularly if these models are shared by Alexander. 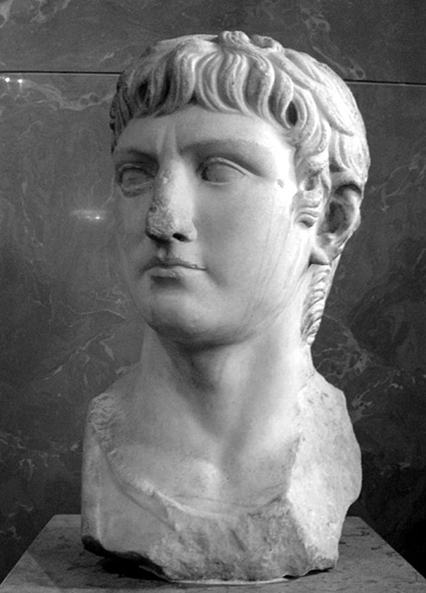 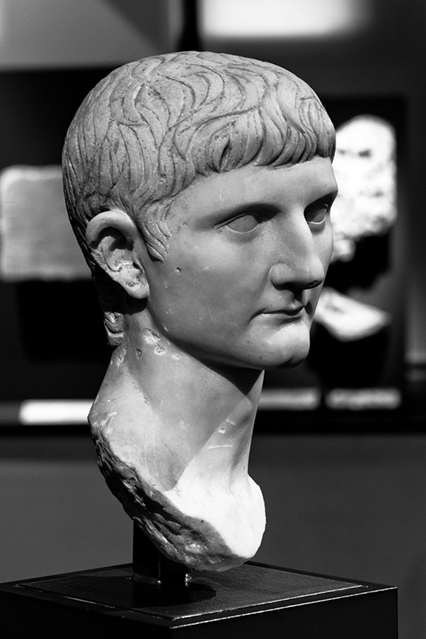 Both meet death because of poison and are publicly cremated on a pyre. Moreover, Germanicus meets Arminius, who may himself be viewed as a Germanic rival of Hercules, in a forest sacred to Heracles (Ann. 2.12.1). This allusion to Hercules recalls Tacitus’ comments about the hero in his Germania (3.1, 9.1, 34.2-3). Notably Alexander never equaled the supposed western conquests of his model Hercules, though by conquering Germans Germanicus had surpassed Hercules’ Iberian and Gallic campaigns. Furthermore, Tacitus alludes to an important historiographic idea—the belief that there were many Herculeses and that later ones imitated earlier ones—when Germanicus visits Egypt to view the monuments of its great conquerors (Ann. 2.60.1-2). Through close analysis of these passages, I will show that Tacitus is, in fact, bypassing Alexander and directly comparing Germanicus with Alexander’s own chief model Heracles.

Replicas of coins intended for reenactment. 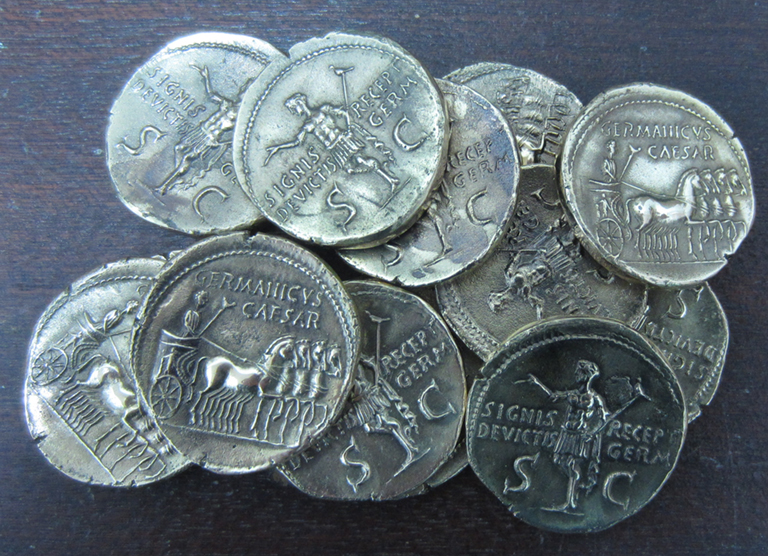