1900 years Anniversaries of Emperor Trajan invaded Armenia and the participation of LEGIO IIII SCYTHICA in this remarkable campaign.
Once I was criticized by some people that I've been made much effort to publish everything that I have in my modest archive on “1970 years Anniversaries of the Roman Invasion of Britain” and Thracian Cohorts and Аla involved in this remarkable for us Thracians event.

I decided to present this anniversary in a short album associated with our club LEGIO IIII SCYTHICA involved in the Armenia invaded 114 A.D.
I hope my Armenian friends to understand correctly mention of this 1900 years anniversary.

In early 114, the Emperor Trajan has finally completed his offensive in Dacia аnd decided to implement his previously well thought out plan to solve once and for all the threat on the eastern borders of the Empire. On the Roman frontier of the Euphrates River are concentrated around 13 legions,together with 12,000 Auxillary allied warriors and imperial Praetorian Guard by 9,000 people - a colossal military grouping of around 100 000 people.
From Antioch the emperor (Trajan) marched to the Euphrates and farther northward as far as the most northerly legion-camp Satala in Lesser Armenia, whence he advanced into Armenia and took the direction of Artaxata.
rajan was resolved to make this vassal-state a province, and a shift to eastern frontier of the (Roman) empire generally.Armenia yielded to its fate and became a Roman governorship,Trajan thereupon advanced and occupied Mesopotamia and, like Armenia, Mesopotamia became a Roman province. 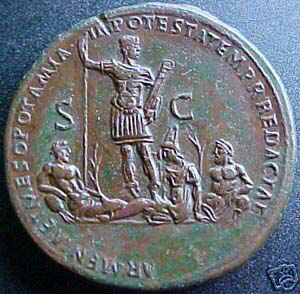 The Roman Senate issued coins on this occasion bearing the following inscription: ARMENIA ET MESOPOTAMIA IN POTESTATEM P.R. REDACTAE', thus solidifying Armenia's position as the newest Roman province. A rebellion by the Parthian pretender Sanatruces was put down, though sporadic resistance continued and Vologases III of Parthia managed to secure an area of south-eastern Armenia just before Trajan's death in August 117.
"Victory Means You Win" Liberty Planet

My centurion premium for this campaign.Replicas in this case:Реплики по този случай Sestertius:re ARMENIA ET MESOPOTAMIA IN POTESTATEM P.R. REDACTAE 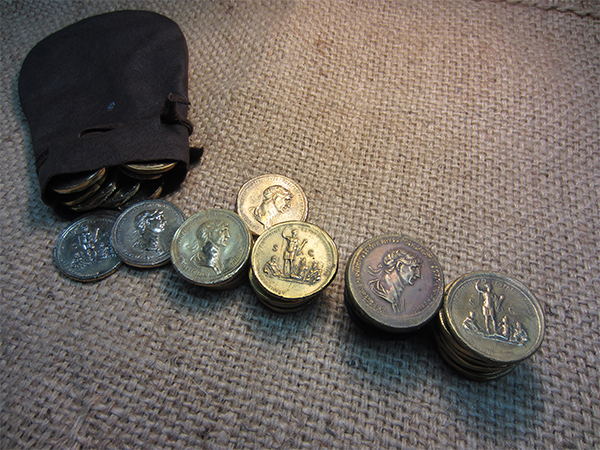 Because Zeugma is at the border between the Roman and Parthian empires, we can be certain that the Fourth took part in all wars between the two states: for example, that of Trajan in 114-117.
Legio IIII Scythica
Have led the military operations IIII Scythica and VI Ferrata together with the XII Fulminata (probably) in the Armenia invaded 114 A.D. Legio V Macedonica also is described as a participant in the Parthian campaigns.
Legio IIII Scythica
In 114 Trajan start from Antiochia in Syria marched on Armenia and conquered the capital Artaxata. Trajan then deposed the Armenian king Partamasiri and ordered the annexation of Armenia to the Roman Empire as a new province.
The new province reached the shores of the Caspian sea and bordered to the north with the Caucasian Iberia and Albania, two vassal states of Rome.

It was the Roman emperor Trajan who finally broke the treaty with Parthia by invading Armenia in 114 A.D. Trajan pushed farther and eventually took the Parthian capital Ctesiphon in 116 A.D., but with his death in 117 A.D. and the rise of Hadrian to the Roman throne, the compromise with the Parthians was restored and the Parthian Vagharsh I was placed in charge of Armenia. (Classical Armenian Online) 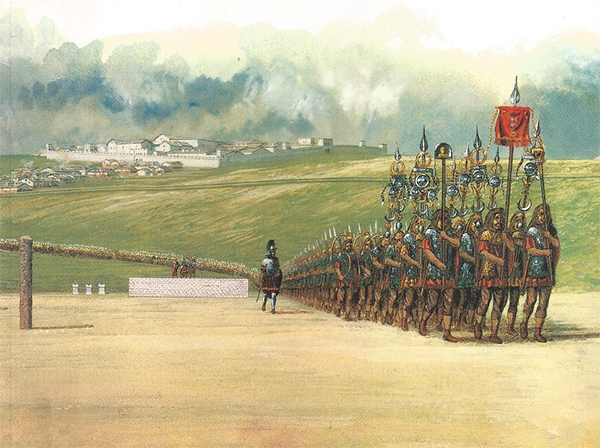 In 114, Trajan invaded Armenia, annexed it as a Roman province, and killed Parthamasiris who was placed on the Armenian throne by his relative, the king of Parthia, Osroes I.[16] In 115, the Roman emperor overran northern Mesopotamia and annexed it to Rome as well; its conquest was deemed necessary, since otherwise the Armenian salient could be cut off by the Parthians from the south.[16] The Romans then captured the Parthian capital, Ctesiphon, before sailing downriver to the Persian Gulf. However, in that year revolts erupted in Palestine, Syria and northern Mesopotamia, while a major Jewish revolt broke out in Roman territory, severely stretching Roman military resources. Trajan failed to take Hatra, which avoided total Parthian defeat. Parthian forces attacked key Roman positions and Roman garrisons at Seleucia, Nisibis and Edessa were evicted by the local populaces. Trajan subdued the rebels in Mesopotamia, installed the Parthian prince Parthamaspates as a client ruler, and withdrew to Syria. Trajan died in 117, before he could renew the war.[17] (wikipedia) 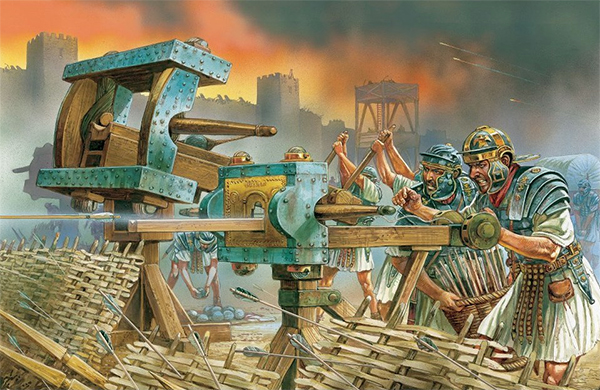 Regardless of Trajan's personal motivation for going to war he marched into Armenia in AD 114. Initial resistance was weak and ineffective (perhaps an indication of the debilitating internal struggle in Parthia); Armenia's royalty was deposed and its independence stripped with its annexation as a Roman province.
Over the following two years, Trajan moved south from Armenia directly into Parthian territory. Militarily, his campaign was met with great success and resistance in the field was ineffective. With the capture of such cities and Babylon and the Parthian capital of Ctesiphon on the Euphrates and Tigris Rivers, Mesopotamia and Assyria (essentially comprising modern Iraq) were annexed as Roman provinces and the emperor received the title Parthicus. Trajan continued his march to the southeast, eventually reaching the Persian Gulf in AD 116. Though Dio Cassius reports that Trajan would have preferred to march in the footsteps of Alexander, his advanced age (approximately 63 years) and slowly failing health forced him to abandon any such thoughts. (unrv history)

Trajan’s last military campaign was meant to settle affairs in the East – no small task, even under the best of circumstances. He left Rome in October, 113 and settled in Antioch, which would be his headquarters and winter retreat for the next few years. In 114 he campaigned in Armenia, in the spring of 115 in northern Mesopotamia and Adiabene, and in 116 again in Adiabene followed by a march down the Tigris to sack the Parthian capital Ctesiphon.
All of these campaigns were successful, with the latter resulting in a complete victory over Rome’s nemesis in the East. The capital was stripped of its wealth and by mid-year Trajan was able to make a brief excursion to the Persian Gulf. He capped off his victory by crowning the pro-Roman Parthamaspates king of Parthia. Few emperors had accomplished so much in so little time.
However, it soon was apparent that the territorial gains Trajan had made over a long career as emperor were at risk. His puppet-king in Parthia did not fare well and revolts erupted in Armenia, Mesopotamia, Cyprus, Egypt, Cyrene, western North Africa and the Empire’s northern borders in Europe. Before Trajan could march westward to address some of these uprisings, he died while encamped in Cilicia. His successor, Hadrian, scaled back Trajan’s empire to a more manageable size, and thus enjoyed a comparatively peaceful reign. 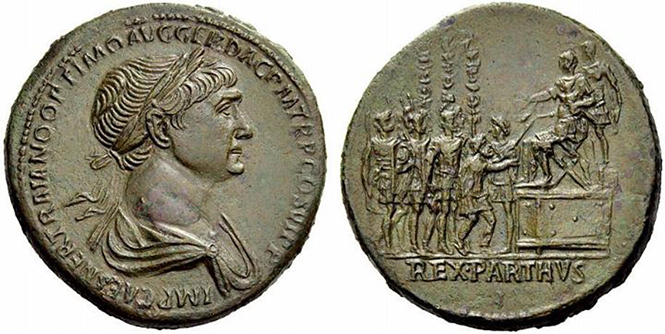 Sestertius winter 114-early 116, Æ 26.51 g. IMP CAES NER TRAIANO OPTIMO AVG GER DAC P M TR P COS VI P P Laureate and draped bust r. Rev. Trajan seated l. on platform, accompanied by officer, extending r. hand to supplicant King Parthamasiris who advances r. towards him extending both arms; behind him, five soldiers holding spears and standard. Before him, an officer standing l., holding spear. In exergue, REX PARTHVS.
This REX PARTHVS sestertius type celebrates the crowning of Parthamaspates, who approaches Trajan in the humblest of manners, crouching and extending his arms in a gesture of gratitude. Unlike the crowd of Roman soldiers that fill the background of the composition, the new king is bearded. On the platform, Trajan sits leisurely, as if without a care in the world, extending a hand toward his new vassal.
The composition is of some interest, as the figures and objects are shown at contrasting angles and at varying depths of field, creating the illusion of movement among those gathered. The impression is of a larger crowd than a work of this scope otherwise might convey. 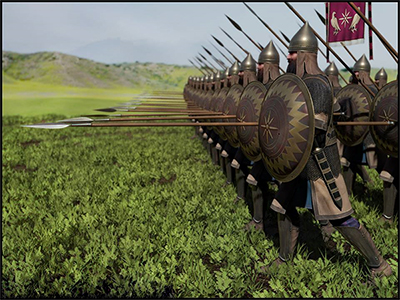 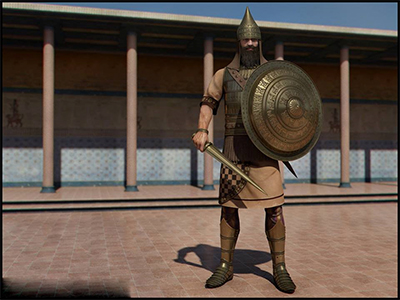 Appropriate legionnaires equipment for the period.The end of the first century and the first quarter of the second century. 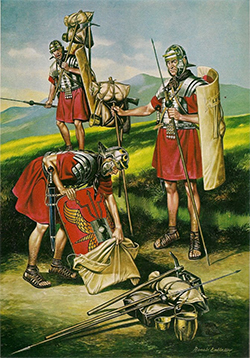 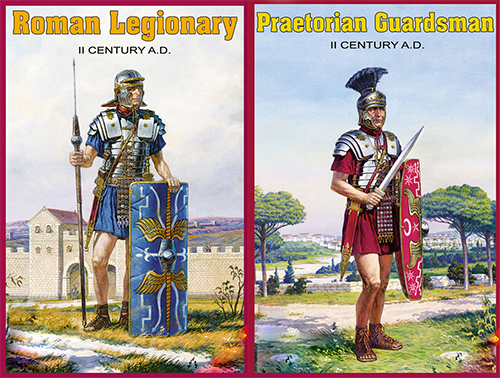 A good drawing of the legionnaire of this period end of the Praetorian Guard from the Trajan's army.