Our club equipment for our Goths Warriors for the 3rd century A.D. period.
We have 10 complete set (of this type) for our club members!
For our needs we currently created this Spangenhelmet for 3rd century Gothic model based on archaeological artifacts.
This type of weapon is suitable even for the later period.The Spandenhelmet is relevant and for the medieval reenactments. As this type of chain mails, spear, spatha and shields. 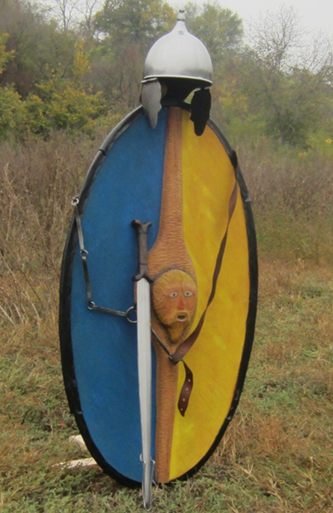 Also we used this equipment for the needs of our new club Celtic re-enacting group –Taranis which is in our association,successfully participated in Roman Festival Apulum 2015.

Celts were numerous in the then Dacian lands. So there is no doubt that the Celtic tribes were shoulder to shoulder with the Dacians and other allied tribes in the war against the Romans. Celtic warriors have shared many victories together with the army of Decebalus. After all, Decebalus was a Celtic name meaning the “right ruler. He likely belonged to the Celtic tribe of Decies/Daesi, which sounds very close to the name of “Dacia. The entire five-year campaign was immortalized in the marble of Trajan’s Column.The column shows the clear presence of Celtic warriors in war scenes half-naked and mustachioed soldiers are undoubtedly Celts. The column also shows Dacians with Celtic shields.
Sourse: iongrumeza.com